Showing posts from 2011
Show all

January 29, 2011
I've decided to integrate my balloon twisting website www.balloonbiker.com   with my blog.  Future posts will be over at that site.  It's still a work in progress, but please update any subscriptions that you may have so that you can follow me there. I'm planning on doing some big projects (both with balloons and biking) in the next year, so come over there and please stay tuned! Balloon Biker
Post a Comment
Read more

Balloons are supremely easy to carry via bike.  Basically...they are light and you really only need to strap down key portions...so you can even move big things that way. After making a road runner for an acquaintance at work, I figured I could try a different way. The best part was when I was biking to work and another cyclist passed me and said "Meep! Meep!" as he went by.
Post a Comment
Read more

I'm finally recapping my Wisconsin Oddities Bike tour from last summer.... Saturday, July 31, 2010 Day 1 I’ve always had a hard time saying no and I began this ride after not saying “no” to several people.  The night before leaving on the ride, I helped lead Chicago’s monthly Critical Mass bike ride.  I had become friends with a map maker for the ride who wanted help, so I was willing to lend my skills and my balloons.  Then, a family that had previously hired me for a birthday party wanted my services.  I had to decline that, but I offered to create a balloon delivery. This was how, in the morning of my first “vacation”  really ever, I found myself working and creating a massive balloon mermaid.  Fortunately it didn’t take too long to twist a kid-sized mermaid holding a few dozen fish wands, but it did put me a little behind schedule to catch my intended train.  Since I had done that day’s ride before, I was confident and decided to take the slightly later train. Eventua
1 comment
Read more

Most people who know me realize that sports are not my cup of tea.  That phrase alone likely shows that I can't even make good sports metaphors. Today, Chicago is apparently playing in a very important game.  I don't think I'll watch it, but I'll make effort to show some civic pride.  As most folks know, when I do a birthday party, I like to bring a special pre-made balloon for the birthday child.  This is one of my favorite parts of doing parties. The party I'm doing today is for a first birthday.  For whatever reason, the child has not yet indicated a preference for favorite balloons.  Astounding!  I offered to bring a surprise, and thinking of things was tough...cute, and for a boy. Well, it's the big game day, so I kind of hedged my bets and am bringing two sculptures!  Yes, two! A bear: and a Bear: Here's to hoping that they like them!
Post a Comment
Read more

I have a confession, I rather enjoy kids movies.  Actually, the last several movies that I saw in the theater can be termed as movies that kids would enjoy, and be allowed to see. When I heard that Zachary Levi of Chuck stardom was voicing the male lead in Tangled, I had a desire to go and see it.  When I heard that the movie was empowering for girls and well told, I really wanted to see it.  However, as it my wont, it took me two months to get around to going to a movie theater and seeing the movie. But then I was told that a birthday child loved Rapunzel.  Finally, I had an excuse to see the movie and I called it research.  $4.00, second run movie theater, very important research.  And it's very proven vital that I did this research.  How else would I know that Rapunzel had flowers in her hair when braided or that frying pans are incredibly versatile weapons? Today I have a party and I'm bringing this as a special gift for the birthday girl: Research is important.
Post a Comment
Read more

While I always appreciate when people think that I’m hardcore for biking in the winter, I have to admit that it really isn’t that bad. Getting prepared and being willing to layer up make most rides rather enjoyable. Some days are certainly worse than others, but even the really cold days are totally doable.   The key for successful bike winter dressing is recognizing that you are going to be generating heat while you bike around. If you wear something that provides insulation to keep the heat in, you’ll be just fine. You can do this with top of the line gear, or thrift-store finds. On my ride in today, I saw thermometers displaying two temperatures, 6 and 3 degrees Fahrenheit. It’s cold, but I was toasty warm. Different people will do different combinations, but what worked for me today wasn’t particularly expensive or hard to come by. I was wearing: Regular work clothes (I’d probably wear the same thing if I were taking the train) Base layer pants – Black Cuddle duds from
Post a Comment
Read more

That bike tour write up...

In the first week of August 2010, I did my first multi-destination bike tour. While I had done a lot of camping trips by bike, I had never done a trip where I would be contained on my bike for multiple days. This would also be one of the first “real” vacations that I had ever taken. In the past, whenever I took vacation it was to go back to Washington State to visit my family. Doing a trip that involved multiple days off and no 4 hour flight was a real treat. I had a few ideas for ride, which I thought were all pretty promising. Would I ride halfway around Lake Michigan and utilize the ferry? How about taking the Amtrak down to St. Louis and riding along the Mississippi River? I also looked at a circle around a national forest in Michigan. Eventually, I decided to do what I titled, the Oddity Tour. This was a ride that would visit some side-show esque sites in Wisconsin. While I’m sure that there are many more strange places in Wisconsin, I stuck to the western end of the easter
Post a Comment
Read more

A few weeks ago, I was idly browsing through Crazy Guy on a Bike  journals and I came across the journal of Nicole Blouin who is undertaking a project where she plans to live on a bike  for the next several years.  This idea sounds fantastic and she obviously has some deep thoughts about this as her journal shows. Nicole began her trip with a Superhero Bike tour.  I had never heard of this group, but the idea was almost instantly appealing.  The superheroes are a loose group of cyclists who meet and embark on tours with community service in mind.  A great article about the tours can be found here . As I loved this idea, but had just missed the Austin tour, I decided that it would be doable to organize a mini superhero ride here in Chicago.  I set it for Martin Luther King Jr. day as I had the day off of work and like the idea that it should be a day on....not a day off. The weather wasn't horrible, but it is January and we are in Chicago.  I knew that we wouldn't have a l
Post a Comment
Read more 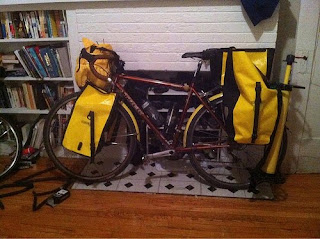 This week I found out about a sale on Ortlieb panniers at Best Buy of all places. I picked up a front set to make a complete package for my bike. Today, I took the time to install my front low-rider rack so I can see how it looks. Very sweet in my opinion.  My next steps are going to be to get a front platform for my busking bag and a dedicated hitch for my Filbert pump. This bike is going to be looking very nice in short order.
Post a Comment
Read more

National Dress Up Your Pet Day

It wasn't until an alert co-worker sent me an email that I even knew about the existance of National Dress Up Your Pet Day. This was only unfortunate in that I had already dressed my pet once this week. ﻿﻿ Cat in a balloon dress ﻿﻿ I felt like I had really jumped the gun...however, I'll take this opportunity to come clean. The fantistic fashion that you see Napoleon sporting was actually not Haute Couture.  Not....Napoleon was wearing a *gasp*  hand-me-down. Original design  It's somewhat shocking, but it's the truth.  After a month, a person-size custom design, was then fitting for a cat. And this is the reason why Napoleon wouldn't show her face.  She wasn't upset about being forced to wear clothing...she was ashamed that the duds weren't designed for her. Hopefully I will soon have a dress that Napoleon will be proud to show her face in.  But in the meantime, please dress your own pets in honor of this important date.
Post a Comment
Read more

Someone's looking fabulous! And like many....this model is a little surly.  Come on...we want to see the dress... That's a little better.  Now turn to the side. Now that is fashion!!!!
Post a Comment
Read more

After a bit of pestering, my friend Sarah Urbansky of Red Squirrel Collection  agreed to collaborate with me to create a balloon dress. We decided that we would have the creation for a New Years Eve fashion show that she was presenting along with several of her other designs. After discussing colors and designs, Sarah come up with a few ideas and we decided on Tron-inspired futuristic dress. By the time the Eve of the Eve rolled around, i was excited to get started.  I inflated over a hundred balloons, prepped the maniquin with the model's measurements, and got ready to do the construction. Doing a dress with the high collar and such was a little more challenging than the strapless dresses that I had made in the past, so I started with getting that construction created. After several hours and some sore fingers, the dress was ready to be fitted. Rachel Ann, the model is a student of art therapy and actually used to be a clown growing up in Milwaukee.  She was a perfect
Post a Comment
Read more
More posts