Showing posts from August, 2018
Show all

Ballooning and bicycling around my neighborhood 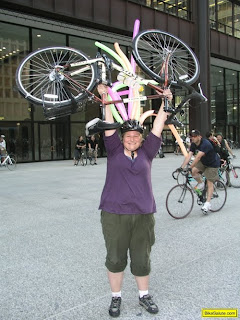 Today was a day for working on projects and getting things in motion.  I set the date and time for a public balloon twisting class at Honey here in Tacoma for October 4, 2018 at 6 p.m..  I'm working up my balloon curriculum and I'm getting really excited about sharing my love of balloons with others who want to try a fun art form. I'm also thinking about making some new designs to sell via digital download.  I'll probably also end up making more instructions for digital download in the near future. My old stuff is all still available at Sellfy , but it's all intended for experienced balloon artists.  Hopefully I'll have my beginning balloon instructions available online soon! Back in my old life, the last Friday of the month was reserved for Critical Mass, a huge roving bike parade that snarled traffic all over the city of Chicago.That was where I first really got into balloon twisting. I could only twist basic stuff, but then I figure out that I could ju
Post a Comment
Read more

I came across this quote years ago and loved it so much that I emailed it to myself and came across it today when I was doing a long-overdue clean-up of my email inbox. Looking through all my old emails and correspondences was bittersweet, but finding this quote really helped me to put my own story into a better perspective. Didn't we all wish we were born with superpowers? Dreams have always been important to me. As a child, I recall having vivid dreams full of action and adventure. Dreams were where you were a hero, where you stood for what was right and saved the day. I always assumed that everyone saw themselves as hero into their own stories because who else could you root for? A duck in a mask isn't going to solve these problems Heroism is seen in a lot of different ways, and my view of heroism was probably shaped a lot more by my love of science fiction and fantasy stories where the fate of the entire world rests on the shoulders of the heroes of the sto
Post a Comment
Read more 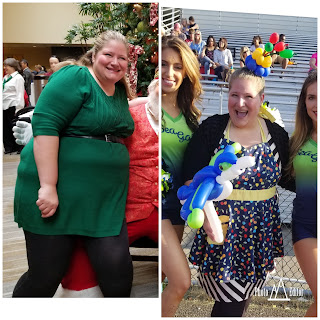 Since moving back to Washington State, I stopped riding my bicycle like I used to.  My balloon business expanded and I found myself driving a lot.  I even bought a car, a 2013 Honda fit, and in the five years I've had it, I've driven over 90,000 miles. All that driving, combined with just generally getting older and more inactive meant that I put on weight.  I was never one of those slim cyclists who fly up hills, but I probably gained about 60 pounds in the last five years. It's embarrassing, but I'm ready for a change. I joined a gym and slowly without a ton of effort, I dropped about 20 pounds.  I started working out more seriously about a month ago and lost another five pounds.  Here is a before and after picture of me at my heaviest and me at about two weeks ago. At my heaviest and about 25 pounds down According to the scale today, I'm down about 30 pounds, so about halfway back to where I used to be.  It's a lot more comfortable, and I can tell
Post a Comment
Read more 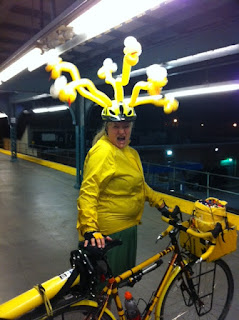 This blog is a big of a time capsule.  In 2011, I switched over to a new website, and just left this one to the dustbin of the internet.  Then in 2012, I blogged on a different website and partially chronicled my adventures of biking from thousands of miles all over this beautiful United States of America. Then in my lamentable fashion, I moved onto to something else and abandoned the Balloon Biker website to the dustbin as well. I had I always felt like I left the story of my bicycle journey just kind of dangling.  I've come to realize that while I really admire people who can write about their feelings in the moment, for myself it takes years of reflection and contemplation for me to find the meaning in the stories of my own life. I'm the kind of person who thinks of the perfect thing to say months later after the moment has passed. And so here we are, it's 2018, and I'm not sure if I can muster the optimism I felt in 2012, when I took a leap from a safe life of a
Post a Comment
Read more
More posts