August 28, 2018
This blog is a big of a time capsule.  In 2011, I switched over to a new website, and just left this one to the dustbin of the internet.  Then in 2012, I blogged on a different website and partially chronicled my adventures of biking from thousands of miles all over this beautiful United States of America. Then in my lamentable fashion, I moved onto to something else and abandoned the Balloon Biker website to the dustbin as well.

I had I always felt like I left the story of my bicycle journey just kind of dangling.  I've come to realize that while I really admire people who can write about their feelings in the moment, for myself it takes years of reflection and contemplation for me to find the meaning in the stories of my own life.

I'm the kind of person who thinks of the perfect thing to say months later after the moment has passed. And so here we are, it's 2018, and I'm not sure if I can muster the optimism I felt in 2012, when I took a leap from a safe life of a ho-hum office job and embarked on an adventure of art, drama, adventure and of course, balloons.


And I think part of that is just because I felt a need to go ahead and wrap everything up at the end with a nice little bow. And like most stories, the end is just another beginning because everything is a kind of circle, or even a sphere, much like a balloon.  I'm at one point in my journey, but every point is also the beginning depending on your point of view.  The universe is not linear and when we go on journeys, it's the journey that in the end becomes more important than your destination. Like this little balloon of land filled with magma that we all call home.

So this place is going to be where I write my own personal philosophy.  The philosophy of the Balloon Biker, a woman who always tried to fit the mold, but who really needed to embrace her own uniqueness that was always a little on the outside. But it's from being on the outside that you get to see the others who are feeling left out or excluded. You get a good vantage point to see the threads that hold a group together. Sometimes it's a bit lonely, but it's a perspective that I've come to appreciate. 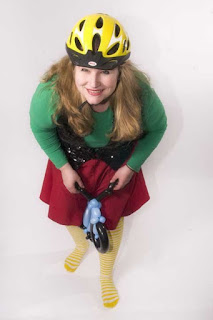 So, back to me, and my balloon twisting and bicycling journey.  My name is Jami and in 2012, I rode my bicycle from Chicago to Boston and then south to Florida while carrying hundreds of balloons and meeting people from all walks of life in cities that varied from Amish farmers to queer activists all the way to toll-booth collectors to Republican candidates and yacht-dwelling retirees.

With balloons as my ice-breaker, I was fearless and bold, and thought I was going to conquer the world. Then I had a crisis of idealism, read the comments on an article, and felt like my mission was a futile exercise of selfishness.  Tired, defeated and lonely,  I came home to Washington State and completely changed gears, and tried to fit into a mold that wasn't me.  I had romantic misadventures, met my husband, and gained mastery of a craft that is ephemeral and yet brings joy all over the globe. 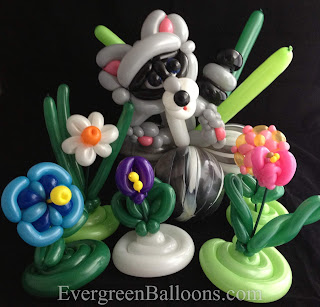 My public story was parties, balloons and famous clients.  Meanwhile, I gave up cycling and sold out as much as you can as a self-employed balloon artist. I fell into a deep despair and found myself a suicidal mess trying to fit into a mold that wasn't my own. I had everything I ever wanted, but I hated everything about myself and the world in which I lived.  It was the classic story: 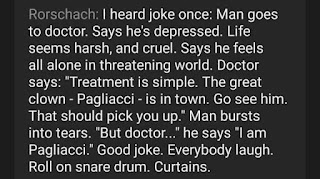 So, that's where I am now, but I still see the joy in balloons. Being at an event and getting to create amazing things out of thin air (and a little bit of latex) is something that I love and something that I want to continue to share with the world. I have a long way to go before I can get back to bicycling all over the country, but I'm going to get started in my own community and I plan to write about some of my goals here.  I also want to look back at what I did write on my old Balloon Biker website.  I think I have most of the site archived, so I'm going to play Captain Hindsight and let you know the real story of the Balloon Biker. I'm still here, even though now I'm a 35 year old woman with some weight to lose and a feeling of dread about the direction of our country.

But the biggest takeaway that I had from my trip was that the United States of America is a beautiful place filled with people who are welcoming, hospitable and willing to help their fellow human being. That was my experience six years ago when I rode my bicycle through red country, blue country and everything in between. The optimist in me wants to think that we're still the same America that welcomes adventuring cyclists. The pessimist who reads way too many stories on global warming and polities worries that the world we live in can't be sustainable and we're beyond hope. The storyteller in me wants to know what the future holds for myself and for all the people I met along the way. I hope this world still has room for someone like me to ride my bicycle around in it making balloon animals because that's what I feel called to pursue.